For me it’s only a matter of lifestyle; But he lost his job because of this

By Christine Hansen
Posted 19/09/2018
In Health, Health, Uncategorized
For me it’s only a matter of lifestyle; But he lost his job because of this2018-09-192020-09-15https://sleeplikeaboss.com/wp-content/uploads/2019/04/sleep-like-a-boss-logo-big.pngChristine Hansen - Sleep Expert for Adults & Business Mentorhttps://sleeplikeaboss.com/wp-content/uploads/2018/09/4-aspects-of-your-life-affected-by-sleep-deprivation-blog.png200px200px
0
0

"For me it's only a matter of lifestyle. But he lost his job because of this"

Let's have some real talk

So school has started and I have to drop off my little one at the bus stop by 7:30 AM, which is super early for a night owl like me, but I do get to enjoy beautiful sunrises and a quiet cup of coffee and a good LinkedIn catch up. (Connect with me here)

So the quote from the subject line is from a call I had with a couple, where both have sleep issues and after talking for a while, one of the sentences that the woman of the couple said really stuck with me. She said for 'me it's just a question of lifestyle, but for him, he lost his job because of it'.

Both are having sleep issues. She's having a lot of sleep issues falling asleep, which means that she very often goes to bed super late and when she wakes up, she goes to work, when she would rather love to sleep in until noon, but that’s not happening, because she has to go to work.

For him, he can't sleep at all or when he does, he is super, super, super tired. He tries to go to sleep on time, but that doesn't really happen a lot and then he's still really tired, so much so that he had more than one episode, where he fell asleep on his desk in front of his computer.

On the one hand, his job is being outside on site, where he manages to pull through; but as soon as he has to do the administrative work in his office, he can't. He has lost more than one job due to his  sleep issues. Both were living separate lives.

Now, here's another thing. When I hear the sentence, for me it's just lifestyle, I really have to pull people back on that and call bullshit! Here is the truth:

Surviving is not living! It's not. We're not on this earth to survive.

Surviving means that you live just about and you don't enjoy your life. In this case or in the case of a lot of my clients, it means that their social life is severely impacted.

They are so anxious about sleep that they have a very strict bedtime that they don't want to miss.

It can ultimately mean that it's not just your lifestyle or life style, but it's your life.

That is when sleep comes creeping back in and you have that car crash, like my friend Eva's dad had when she was only three years old and he didn't survive. I didn't know about this, until she told me recently, when she heard me talk about it. This is not a made up story, people. This is real.

A good example of this was in the 1960s, when a young 17 year old DJ Randy Gardner did an experiment to be accepted in the Guinness Book of Records and he didn't sleep for 11 days. Even though he was technically awake (his eyes were open), graphs, science and research showed, when they were observing him, he was actually dreaming. He had hallucinations and his body took whatever sleep it could get, without him having to close his eyes. He had someone monitoring him all the times; so he didn't lay down and went to sleep. Even being awake, standing or sitting; his body would take that sleep, because it needed it. There's nothing that is telling your body it cannot do that, when you are driving. At some point your guard is going to drop and that's when your body is going to take it.

If you are behind the wheel or if you're in front of the computer desk, even though you know that your boss might check in or your client might actually pop in or have a call, then that's on you. Sleep does not care about your schedule or your agenda. That's really important to know!

I recently read a study in fast company that stated, that people, who sleep less than six hours for more than 10 days, have the same mental capacity than people, who don't sleep for two days straight. What does that tell you? To me, it tells me different things. Six hours is just a benchmark. It means that a lot of people actually, there's just 1 or 2 % of the population that needs less than six hours of sleep. Minus or Plus 10, 15 minutes. Most people manage to fool themselves, thinking that six hours is enough and they manage to get through the day.

The same happened with these people in the study. They were woken up after six hours and they felt fine. For 8 days their cognitive capacity was the same as always and soon afterwards, it declined a lot. They still had the impression that everything was fine though. They hadn't noticed the decline in their mental performance, which means you most likely think you're fine, but actually you are under-performing so much under your capacity, because if you don't sleep for two days straight, experiments and research have shown, that it's difficult to do mental connections to focus.

I will even argue, that just one hour of less sleep is going to impact you. Why? In Springtime, we lose an hour of sleep or at least the way you have daylight savings, the rate of heart attacks increases by 24 %.

In Fall, when we gain an hour of sleep, the rates of heart attacks decreases by 21 %  and that's just one hour in the day. So what is happening when you do this chronically? Please think about this. It is really important.

Finally my last kind of food for thought for you is the following: The Guinness Book of Records has taken the category of sleep deprivation out of its record, because it was too dangerous. However, a couple of years ago you had Felix Baumgartner, jumping to Earth from a helium balloon in the stratosphere with around 1,357.64 km/h. That was still okay for the Guinness Book of Records, but sleep depriving yourself is deemed too dangerous. Think about that!

Now here's my question for you or my last plea.

If you think or if you know that you are not sleeping enough and you would like to; have tried everything under the sun and you feel like one of my clients who come to me, because when they come to me, they are desperate. There's nothing that they can't think of they hadn't tried. If you think you are in that category and you are nodding to this, then get in touch.

You have nothing to lose and I'm here for you.

If you know someone who's in this situation, please share my video with them. Please let them know about me and help them not to be Eva's dad, who died in that car crash when she was 3. 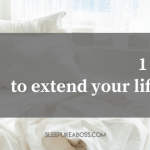 How to extend your lifespan by doing this 1 thingHealth, Health, Uncategorized 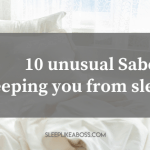