Just snoring or is it sleep apnea? Interview with Dr. Murphy

Working as sleep experts, we often have clients who suffer from sleep apnea. And they are men as well as women, and they might be as young as 40 years old.

Sleep apnea is a sleep disorder that, if it goes untreated, can cause heart disease, diabetes, and a number of other health issues.

One thing that is deeply concerning is that there isn’t much awareness and knowledge in the general population when it comes to sleep apnea. It is not an old man's issue.

While it is true that elder and overweight men do suffer from sleep apnea, women - especially when entering perimenopause or menopause have it as well. And lots of these cases go unnoticed for too long.

This is one of the reasons that we decided to invite Dr. Mike Murphy to join us for a talk about sleep apnea.

Michael P. Murphy, MD, MPH is trained as a sleep medicine physician and as an ear, nose, and throat (ENT) doctor. He is one of only 275 physicians in the United States who is double board-certified in these two fields. This dual certification enables him to treat sleep apnea, snoring, and other sleep-related conditions, providing a full range of treatment options. He is able to perform the Inspire surgery for patients with sleep apnea who have not tolerated other treatments.

What is Sleep Apnea?

Sleep apnea is a sleep disorder.

Dr. Murphy explains that when we're sleeping, our airway is just a spectrum in terms of airflow. On one end of the spectrum is nice streamlined airflow without any symptoms, then at some point that streamlined airflow becomes turbulent, and we begin to snore. Further down the spectrum, turbulent airflow becomes blocked or obstructed, and this is where sleep apnea occurs.

How Do You Know If You Have Sleep Apnea?

If you're someone who snores on a nightly basis, you may suffer from sleep apnea.

Some sleep apnea symptoms you should pay attention to: 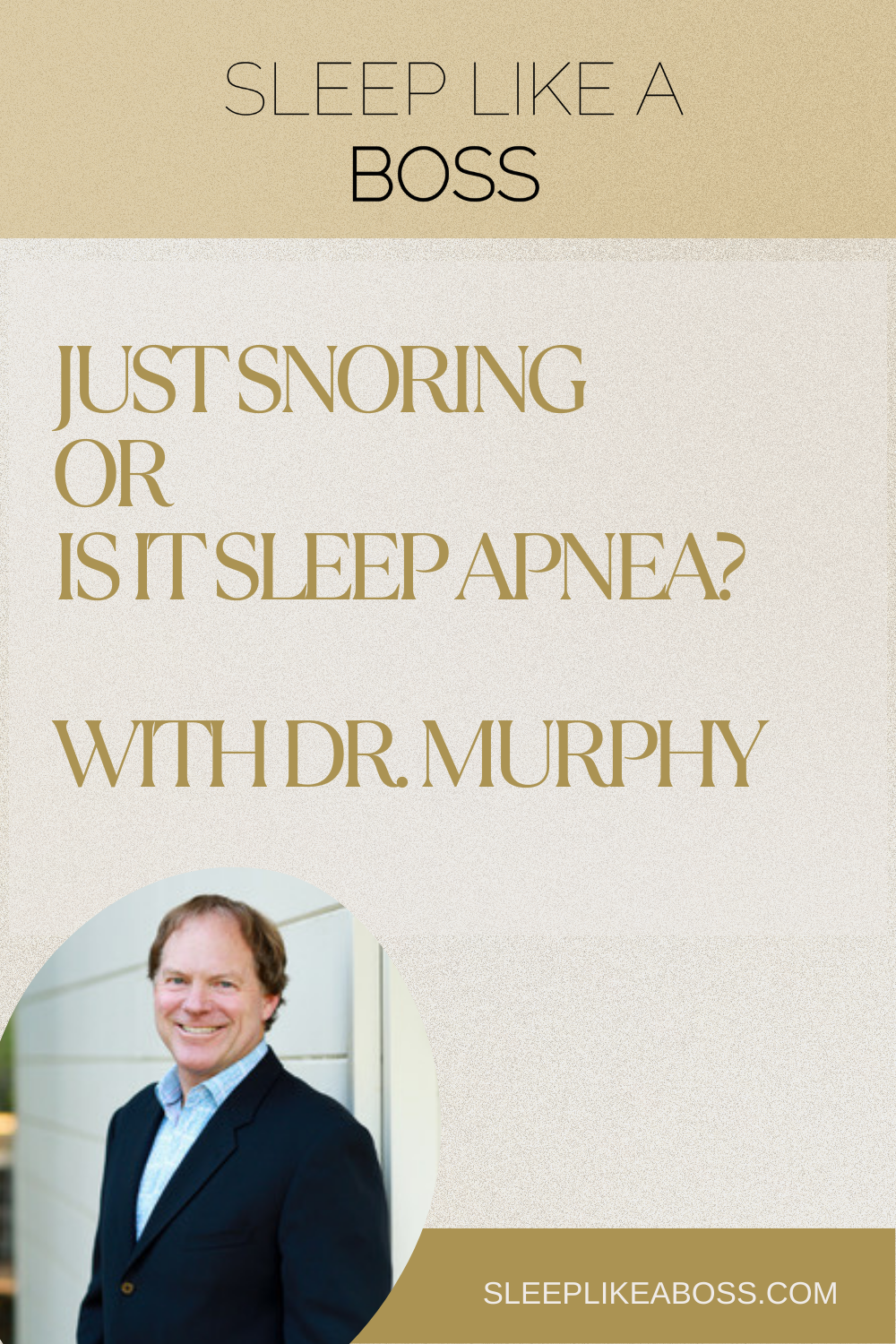 There are millions of people out there who suffer from snoring and sleep apnea, who haven’t been properly diagnosed. According to Dr. Murphy, 75 million Americans snore every night.

There is a misconception that snoring alone is just a quality of life issue and it's otherwise harmless.

But, in reality, all studies have shown that even if you just snore and don't have sleep apnea, you're at increased risk for hypertension and you also have a lot of the daytime symptoms or poor-quality sleep as well. And snoring is one indicator of sleep apnea.

To get a first idea of your risk factors for sleep apnea, you can use a well-studied questionnaire mentioned by Dr. Murphy, which is called Stop Bang. You can find it here.

The official assessment of your sleep can be done at a sleep clinic or at home.

There are two types of sleep apnea that are being assessed: central and obstructive sleep apnea.

Having central sleep apnea means your brain doesn't have enough drive to breathe when you sleep.

Obstructive sleep apnea means you are actively trying to breathe but something is blocking your airway. This could be a deviated septum, blocked sinuses, enlarged tonsils or an issue with your tongue, as the Dr. explains.

When it comes to diagnosing snoring and sleep apnea, there are two events that are measured.

One is called an apnea and it’s defined as a 90% (or higher) blockage of airflow in the airway for at least 10 seconds.

The other is called hypopnea and it’s a partial obstruction of airflow (30%-90%) for at least 10 seconds or more. After measuring these episodes, the total number that occurs per night is divided by the amount of time you're asleep and the result is called the apnea-hypopnea index, that's basically events per hour.

If sleep apnea goes undiagnosed, it can lead to many health issues through two major pathways.

The first pathway is what we call respiratory arousal.

As we're sleeping, we go through different stages of sleep. If you have really significant or severe snoring or if you have hypopnea or apnea events, what happens is you ascend to a lighter stage of sleep.

In the deep stages of sleep, that's where our parasympathetic nervous system takes over: our blood pressure goes down, our heart rate goes down, our metabolism goes down, and our brain clears out the products of the day's events.

Unfortunately, when you're having these snoring and apnea events, what happens is the exact opposite: your body goes into fight or flight mode, and the activation of the sympathetic nervous system kicks in. Your body thinks it is in danger and not in a relax-and-repair mode.

This can - over time - lead to cardiovascular conditions such as hypertension, but also, to cognitive impairment, and dementia. If you're not spending enough time in these restful stages of sleep, some of the harmful byproducts - plaques - can build up in the brain over time and this can lead to cognitive issues.

The second pathway is intermittent hypoxia.

As our airway is blocking off, our oxygen levels are going down, and that creates a cascade of inflammation and other problems in our body.

And ultimately, that can lead to damage to the inside of our blood vessels and it can lead to the formation of clots.

From a metabolic standpoint, when you're not spending enough time in that restful stage of sleep, it actually leads to insulin resistance in your body.

If snoring and sleep apnea are not treated over time, they can support the onset of pre-diabetes and the development of type two diabetes as well.

Dr. Murphy mentions that 50% of patients in the US who have hypertension or coronary artery disease also have sleep apnea. So this shows how closely correlated these diseases are. Unfortunately, most people don't know this and don't get checked for it.

Dr. Murphy explains that there are different levels of treatment required depending on the kind of sleep apnea and where in the airway the blockage resides. Is it in your nose, your tonsils, your tongue?

It's really important to understand where the problem is because you may, for instance, have more than one area that is affected. Based on that, the right treatment can then be applied and the root cause can be addressed.

So, if you think that you or a loved one might have sleep apnea or severe snoring, please guide them to the survey, reach out to your doctor or medical provider to discuss your concerns and have yourself checked out.

And please forward this information to anyone it might be relevant to.

This interview was conducted by our Sleep Like A Boss coach Eva Nyhagen. Learn more about Eva by clicking the button below.

Annika Carroll
Recommended Posts
COPYRIGHT ©2022 Sleep Like A Boss MEDICAL DISCLAIMER: The opinions expressed on this site and by Annika Carroll and guests are published for educational and informational purposes only, and are not intended as a diagnosis, treatment or as a substitute for professional medical advice, diagnosis and treatment. Please consult a local physician or other health care professional for your specific health care and/or medical needs or concerns. Information on this website is provided for informational purposes only and not intended to replace a one-on-one relationship with a qualified healthcare professional and is not intended as medical advice. Christine Hansen provides information based on her thorough education and encourages you to make your own health care decisions based upon your research and in partnership with a qualified healthcare professional. If you have or suspect that you have a medical problem, contact your health care provider promptly. Do not disregard professional medical advice or delay in seeking professional advice because of something you have read on this website. Information provided on this website and the use by you of any products or services referenced on this website DOES NOT create a doctor-patient relationship between you and Annika Carroll. Information and statements regarding dietary supplements have not been evaluated by the Food and Drug Administration and are not intended to diagnose, treat, cure, or prevent any disease. Copyright © 2022 Annika Carroll. All Rights Reserved. 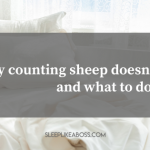 Why counting sheep doesn’t work – and what to do insteadHealth, Health, Sleep, Uncategorized