Let’s talk about the big S and sleep! (the big S being SMOOTHIES of course!!)

What is the relationship between a smoothie and your sleep? It doesn't seem obvious at first. My client Sarah, whom I've been working with one on one, had one big thing she didn’t want to do in the morning and that was eat (and she's not the only one of my clients). A lot of them have the same notion. Let’s skip breakfast... It's morning, they're tired, they cannot stomach having to eat something, it's too much work or because they are so tired, they have the feeling that they're not hungry. But that step of skipping food in the morning, is actually stressing the body out big time. As we know,

stress and sleep are not a good combination.

Smoothies are my favorite, favorite thing to suggest to people, who don't like to eat, because digestion is taking up a lot of energy. Smoothies are pretty much already pre-digested in way, because they are blended. The nutrients are easily absorbed and they're super healthy. The other thing that I like about them is that you can just take them. You can prepare them in advance and freeze them. A couple of nutrients will get lost, but it's still pretty efficient. Take them out of the freezer, into the fridge the night before and then you just take them out in the morning, put them into your cup holder and you can slurp them, as you are driving to work. Obviously you can also add super great ingredients to them.

Here’s how I do them: I always start with a liquid of course. (make sure you have enough of it, so that you can blend it nicely). Then I usually take some kind of spinach, kale or anything else GREEN. I try to put all the colors of the rainbow in there. Mango, red fruit and I also add protein powder in order to really make sure that it's filling me up until lunchtime. I also use some type of hemp seed or chia seed and some DARK CHOCOLATE, usually over 70 %, just to have a little bit of SWEETNESS. I also love to add cinnamon. Cinnamon helps to keep your blood sugar levels equalized throughout the day.

Having a blood sugar level that is nicely balanced instead of a spiky one, is definitely going to help. If your body gets used to a spiky blood sugar level, you might have an involuntary spike at night time, which will trigger you and keep you awake. It's better to actually have a nice balanced curve all day long.

Your good sleep starts in the morning with your breakfast. It's going to cater to your energy. It's going to relax your body, because it's not starting on an empty tank. It doesn't need to rise all of its reserves. It won't be stressed out straight from the bat and just giving your whole body a stressful start. So, smoothies for the win!

I would love it, if you'd share your favorite smoothies recipes with me. I'm always on the lookout for great recipes! 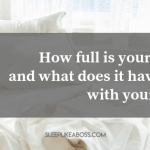 How full is your bucket and what does it have to do with your sleep?Health, Health, Uncategorized 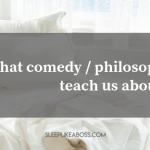 What comedy / philosophy can teach us about sleepHealth, Health, Uncategorized