The magic of castor oil with Sherri McKnight

By now, you probably know that at Sleep Like a Boss we are all for natural, non-pharmaceutical solutions when it comes to supporting your sleep.

Castor oil is one of those natural solutions I like to add to support overall health & sleep. People have used castor oil for thousands of years, for many different purposes.

We are going to learn all about the benefits and how to use castor oil from Sherri McKnight. Sherri is the Medical Advisor at The Queen of the Thrones, my favourite company when it comes to castor oil and castor oil packs. Sherri is a Natural Wellness Doctor and private wellness chef. She has been in clinical practice treating patients for over 10 years with a specialty in Homeopathic Medicines and Nutrition.

It is a carrier oil, and it differs from other oils because of its molecular weight and because of its active component called ricinoleic acid. Ricinoleic acid allows the oil to get down into the dermis area, the lower levels of our skin, where the circulatory and lymphatic vessels lie. This is where it can then work its magic.

Castor oil has many different benefits:

How to Make sure You Get Good Castor Oil

Since the oil penetrates into your skin, you really want to make sure that you buy a high-quality product.

Here are some of Sherri’s tips for choosing a good castor oil:

How to Use Castor Oil

There are two main ways in which you can use castor oil: topically or as a pack.

When used topically, it's mostly for beautification purposes. When used as a pack, there are three aspects that are involved:

The first one is mechanical: The pack itself provides compression therapy. For example, when the pack is placed over the liver, it combines with the movement of your breathing muscles and acts as a pump for your lymphatic system, encouraging lymphatic drainage.

Secondly,  there is the neurological aspect that occurs when the pack is placed on specific dermatomes. This activates the somatic visceral reflexes, which trigger the activity of the internal detox and cleansing organs like the liver, kidney, gut and gallbladder.

The third aspect comes as the result of combining the neurological and mechanical because the pack stimulates the body's receptors, and also stimulates the natural oxytocin and dopamine.

This gets us from that state of stress, which most of us are in, to that state of “rest and digest” or parasympathetic state where we can actually begin to heal or become more regulated.

Using the packs every night, an hour before bed and throughout the night while you sleep, will help retrain the body to do what it's supposed to do.

And you can use it for so many different things: hormonal balancing, sciatic pain, any kind of chest pain or breast pain, for PCOS or endometriosis, any kind of pain in the pelvic area as well, for knee and joint pains, the list is endless.

The only time you shouldn’t don't apply the castor oil pack is during pregnancy.

And the only reason for that is that when people do consume the oil on its own, it can cause uterine contractions. So, it's just safer to just stay away from it during that time.

Also, you don't want to put the oil on an open wound; it’s great for scaring but after the wound is closed.

If you’re interested in learning more about the castor oil packs and how to use them, make sure you visit the Queen of the Thrones Instagram as well as their website.

You can also find a blog post about the benefits of castor oil on sleep I have written for them in the past here. 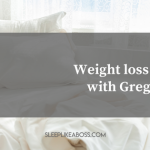