What comedy / philosophy can teach us about sleep

By Christine Hansen
Posted 30/10/2018
In Health, Health, Uncategorized
What comedy / philosophy can teach us about sleep2018-10-302020-09-15https://sleeplikeaboss.com/wp-content/uploads/2019/04/sleep-like-a-boss-logo-big.pngChristine Hansen - Sleep Expert for Adults & Business Mentorhttps://sleeplikeaboss.com/wp-content/uploads/2018/10/what-comedy-2f-philosophy-can-teach-us-about-sleep-blog.png200px200px
0
0

Let’s talk about what sleep is, how it works, and the kind of the stage of sleep there are.

We're going to get a little philosophical and to start off I will use a quote by George Carlin. I really love the way he describes sleep - it's simply beautiful.

"People say I'm going to sleep now as if it were nothing. But it's really a bizarre activity. For the next several hours, while the sun is gone, I'm going to become unconscious temporarily, losing command over everything I know and understand. When the sun returns I resume my life. If you didn't know what sleep was, and you had only seen it in a science fiction movie, you would think it was weird and tell all your friends about the movie you had seen. They had these people you know? And they would walk around all day and be okay? And then, once a day, usually after dark, they would lie down on these special platforms and become unconscious. They would stop functioning almost completely, except deep in their minds they would have adventures and experiences that were completely impossible in real life. As they lay there completely vulnerable to their enemies, their only movements were to occasionally shift from one position to another; or, if one of the mind adventures got too real, they would sit up and scream and be glad they weren't unconscious anymore; then they would drink a lot of coffee. So, next time you see someone sleeping, make believe you're in a science fiction movie and whisper, the creature is regenerating itself." by George Carlin, Brain Droppings.

Let’s go into the science behind it a little bit. I really love this quote and the way he describes this as science fiction, regeneration, unconscious. There are a couple of things that I want to point out. The first big one obviously being, the unconscious kind of state.

When we sleep aren't actually unconscious. Being unconscious means you don't react to anything that's going on around you; whereas when we sleep we do. Even in deep sleep, we do react to outside triggers, which could be movements; like your cat, your dog or your partner for example or sudden noises you are trained to hear, like your baby crying for example. You might not necessarily react to traffic or to fire sirens, but your newborn just whimpering a little bit would make you wake up straightaway. We are still filtering while we are sleeping. You can really imagine it like a backup system in your brain that is still having you be alert to some extent.

That's why sleep is so fascinating. You're active and nonactive at the same time. You are not unconscious and yet not completely conscious either. It's totally phenomenal, I love it! I also love the way George Carlin describes having adventures, that are completely impossible in real life, in your dreams. Your dreams are really where your brain/ your psyche, is going through everything that didn't make sense during the day. It’s going through the stuff that has disturbed and/ or upset you or that you couldn't explain and beautiful things that you want to relive. All of that is mishmashed together and your dreams are the safe space, where you can practice and that's where, for example, lucid dreaming is coming from, where people try to get into that state, where they can practice things that they are scared of. Many high achievers and athletes do that for example before a race or when there's something going on that they are not quite sure of or a little bit scared of and they use that safe space to train themselves. It's absolutely fascinating! The last thing that I really love of Carlin’s sleep description is that last sentence “and whisper, the creature is regenerating itself.”

It's what we do. We're healing ourselves. We're healing teeny-tiny tears that have happened during the day. Teeny-tiny oxidation stress that has happened to our cells. Our brain is building up toxins. All of that is regenerated and we kind of start with a clean slate. Obviously, it's not entirely clean, because we are aging. It's the way our body is wired, but we can really stop our aging process, or slow it down, by getting enough sleep and regenerating ourselves as much as we can.

Isn't that an amazing gift? It’s crazy if you think about it. I don't know if there's a lot of wisdom to this today, but I just really love the topic and I love this quote.

One more thing I wanted to comment on was the part where he says that sometimes we're completely still, except for the little movements we make. We all move between our sleep cycles. In one night, we have around four to five sleep cycles. Within these sleep cycles we have our sleep phases: light sleep, deep sleep and REM sleep. Each sleep cycle is around 90 minutes, we wake up and we go into our next sleep cycle. We all wake up.

Some people remember it and some don't.

Some people lie completely still and they just move in between those little wake ups and other people will actually move a lot during deep sleep or light sleep. It’s very individual. That's why I'm also wary of things, like Fitbits or sleep trackers, because we are so different in our movements. I, for example, don't move at all when I sleep. I literally just lie down and pretty much stay in the same position all night. Whereas other people will move tons and tons while they're sleeping.

How is a machine really going to track that? If you imagine a sleep track has this exceptionally sophisticated electrons to measure your brain wave movements, then that would be the only way that I would trust it to actually see how you're sleeping. But until then, I'm a little bit wary of it and I find that the machines stress out my clients a lot more than they do good. They think that they're not sleeping enough, which is not necessarily true.

I am not sure if I shared a lot of wisdom with you today, but I just really love that quote and wanted to share it with you. If you also have any sleep quotes, please do share them with me! 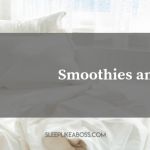